Daily Post: Drawings of Tati, also, How Not to Keep a Sketchbook

Did these while re-watching a little bit of Tati's "Playtime". Tati, for those who don't know, is the great French silent auteur and my favorite silent actor. In "Playtime" There's no plot to speak of and sometimes all it looks like is a lot of elaborately choreographed people walking around, but patience is rewarded. Apparently Tati's most expensive film. Can't wait for Chomet's "The Illusionist" which will star an animated version of Tati.

I'm particularly pleased with this one:

I love Tati's combination of ungainliness and grace, with his tall awkward stoop. The guy on the far right is just a random Frenchman from the film, but here's Tati again, stooping. 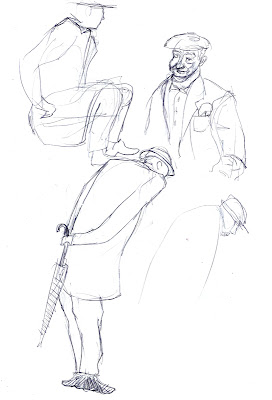 An Added Note About Not Keeping a Sketchbook:

I've been continually told throughout my education how important keeping a sketchbook is, but I've always hated sketchbooks. It always feels like a big commitment, putting a drawing down in that hard bound book. Even cheap ringed ones feel like some kind of indelible record of my crappiness. But lately I've been keeping more of a "sketch envelope". I take a sketchbook with me when I travel (which is rarely) but since I'm home more often than not, I just sketch on 11x17 bond paper. It's cheap, and I don't have to give a bad drawing a second thought. There's no commitment involved. This has worked out well for me and I have been drawing more than ever. The good drawings go in the envelope, the bad ones in the trash. So the sketch envelope seems to be the best solution for us shut-ins who hate keeping sketchbooks.
Posted by Jed Alexander at 4:18 AM