I really love the engravings of Ernst Haeckel, particular his monochrome studies of jellyfish and diatoms. This and the insect studies I've been doing lately are very much inspired by these. 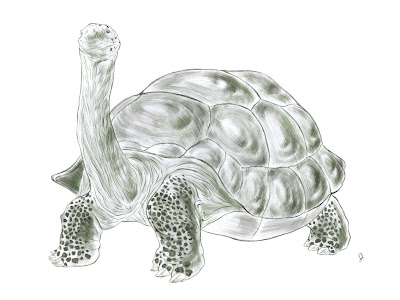 I wasn't happy with the colors on the first one, so in an attempt to fix them, I managed to completely overwork it. I traced it up on the light box and gave it another try using a different palette, but that didn't quite work out either. I finally decided to go with more of a monochrome palette like the elephant and my insect studies, and I think I'm finally satisfied with this one. I'm particularly pleased with the shell--the dry brush patterns remind me of the kind of tool marks you see in a stone lithograph. Something good came of the earlier, more ambitious tortoise piece, the one that I spent a couple of weeks on earlier this month that ultimately didn't work out--I got lots of practice making those swirl patterns, something I didn't quite manage in the first attempt at this one. These look much more purposeful and deliberate.

This is something I'm always telling the student I tutor--make sure everything you do is purposeful and deliberate. Even accidents can be purposeful if they come about naturally through the discipline of your process. I have ocassional happy accidents, but usually they come about after a lot of trials and failures, if not on that particular piece, than on pieces like it. Some pieces look like they're a collection of happy accidents, but each happy accident has a history of exploration behind it. When you see some really spare Picasso drawing that looks effortless, it's because of all the pictures he did that you never see. Unlike a painting that can be reworked, the process in a very spare drawing is invisible because you can't rework it. The layers are discarded. All you see is that last pass, that final result. So when you see that final effort, what seems like effortless skill, some spontaneous image that looks as though it was done in a single sitting, its probably just the last image in a series of similar attempts. Or at least, that's how I make my dry brush images.

Discipline can also mean knowing when to get out of your own way. When to leave the right mark alone, or when to take the risk of allowing something spontaneous to happen, knowing that it could just as easily go wrong. Risks aren't really risks when you take them into account as a part of your process, if you anticipate failing as a necessary part of succeeding.

I've always been a fan of naturalistic English directors like Mike Leigh and Ken Loach, and recently found this old Ray Winstone film about a boys reformatory called "Scum". I saw it streaming on Netflix. It reminds me a little bit of another favorite of mine, about a boys prep school called "If..." with a pre Clockwork Orange Malcolm McDowell, though Scum is a lot more brutal. Winstone doesn't have McDowell's charisma, he has a lot more presence today, but you can still see how even at such a young age he was a pretty amazing actor. This one came out in 1979, when he was still probably a teenager. It's pretty painful to watch, and there's some graphic and very intense violence, including a horrific rape scene, but it's a compelling film, and very well done with great performances all around. I'd really like to see more from ALan Clarke, but it looks like he's only directed two other movies that I can find. Everything else he's done has been for British TV, and will probably be difficult to track down, though I did see two shorts also available from Clarke on Netflix that I might check out. 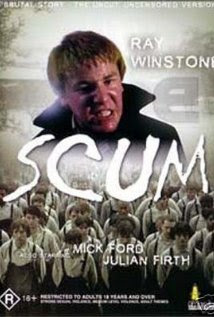 Posted by Jed Alexander at 4:55 AM