Sometimes You Have to Chuck it All and Start Again

He's a very small preview of a much larger dry brush piece that I've been concentrating on over the past week. After working the better part of a week on it, it wasn't quite working out. I'm going to have to rethink it. 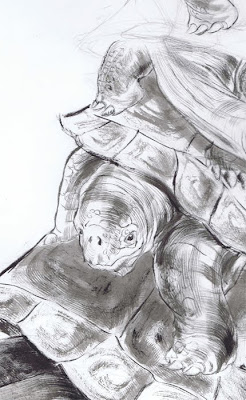 Unfortunately, my dry brush technique can be very unforgiving. There's no painting over a mistake--the first application is all you get, so sometimes I have to chuck it all and start again. This isn't so bad when it's a little 8x10, but this piece is 27x41. I used to get pretty disheartened when this would happen, but now I've accepted that this is the way it goes. Fortunately I have an enormous light box, so with a little bit of repositioning, I can trace up what I have so far and give it another go.

This isn't unusual for a dry brush piece--some of my best big pieces have gone through several incarnations, even the larger ones. Though not dry brush, my 38x50 inch Elephants on Pink Buildings piece went through three other iterations. Yes, that means I drew all those little windows three times. The recent pot-bellied pig was also attempt number three. No matter how much I realize that this is a likelihood with a piece like this, I go in with the full intention of knocking it out in the first try. It happens--but rarely.

This is why it always drives me nuts when people ask, "how long did that take you to do?" It's a perfectly reasonable question to ask, and though I might be able to tell you how long a particular piece took to make, this wouldn't really answer the assumption behind the question. The assumption is that every piece involves the same basic procedure. Unfortunately this is not the case. In my illustration work, since i work in pieces, I can revise and revise and revise again if there's any element of the picture that isn't working, and it's not only more forgiving, but it's more predictable. My dry brush pieces aren't quite so methodical. But usually, everything starts with some kind of failure. That first drawing or first sketch is probably going to get chucked.

Even as a writer, I know that more often than not, that first paragraph is going to get chucked, not just rewritten but completely eliminated, but when I'm writing it, as far as I'm concerned, that's going to be the first paragraph of the story. It's a weird kind of self-hypnosis. I begin every paragraph or dry brush piece with boundless optimism, but over the years I've become somewhat inured to the pain of this particular kind of failure. It's not the end, I can always pull out a blank sheet and start again, and if I'm tenacious enough the piece will work itself out. Not always, but more often than not. It's just a question of being bull-headed. This, I'm convinced, is the secret of success. Being a hard-ass, but a benevolent hard-ass. Not kicking your own ass for failing, but not resigning yourself to the failure, either.

I remember when Reg first saw me do this kind of thing, chuck what she saw as perfectly good work. She would worry for me, and I appreciated the sympathy, but eventually she grew to understand that this was just the way it worked. About two years ago, when I did my James and the Giant Peach piece and was trying to figure out how to draw kids (something I'm still struggling with) I drew over 70 drawings of James. I remember telling my Dad this on the phone before I had found one I was satisfied with, and he said, "well there's got to be one in there you can use. Maybe you just need to take a second look at number 45, or number 27?" But sometimes it just takes 70 drawings. Hopefully I won't have to draw this one more than twice. Or at least that's what I"m telling myself.

But I'm very wary of anyone who romanticizes this struggle--it is not unique to picture making. Making art is not a magic trick. It's just work, like any other kind of work, even if it does have it's own unique challenges. But everybody goes through some version of this, in one form or another. We all work, and I think, for most of us, there is satisfaction in doing good work, not just in the product, but in the process. If it wasn't hard it wouldn't be nearly as satisfying.
Posted by Jed Alexander at 2:43 AM