Sepia Elephant, What Happens to Your Pictures When Other People Own them?

This two, is about 18x24, with a fair amount of white space around it. It's done in drybrush with acrylic ink. This one was done yesterday, and I got one I was satisfied with on the second attempt. 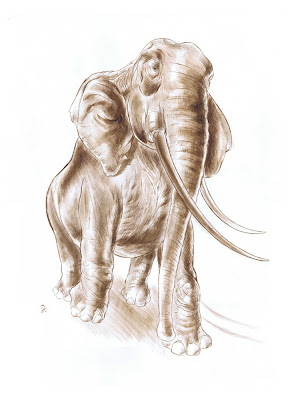 Sometimes people don't understand that the white space is part of the drawing. Recently I visited someone's home where they had hung one of my prints and had cropped out the white space. I found it incredibly frustrating. And even more appalling: they had trimmed off the edge of another one of my prints. But when you sell, or give away a print, you can't really dictate what someone is going to do with it. They could cut it up and put in a collage, they could laminate it, they could do anything with it. What bothers me is that someone is going to see that picture and think that what was done to it was my intention.

Generally I like to imagine that when someone buys my art, or I give a print to them, They put it in a nice, understated frame, or mat, though I'm sure in someones house I have prints that have been thumbtacked to the wall, or that are in some overly ornate frame, or that have some brightly colored mat, or some similar act of vandalism has been perpetrated against them.

There's a Jim Woodring comic in which the Jim Woodring stand-in enters a friend's house to discover that they have framed a drawing that he had originally thrown in the garbage and written and obscenity over, never intending for it to be seen. This is kind of what it feels like sometimes when people do something like this. But in the end, they bought it, they framed it (or didn't frame it) because they liked it. Or liked some portion of it. Or liked it with the addition of a bright red mat. But they liked it, and it no longer belongs to me. I can't go to everyone's house who bought a print of mine and supervise what they do with it, even though sometimes I kind of want to.

If it's mass produced print media, when it's published in a magazine for instance, someone's probably spilled ketchup on it, or put their coffee cup on top of it. For some reason that doesn't bother me as much as when it's a print. In fact, it doesn't bother me at all. I kind of like the idea that the image has a life in the context of other people's lives. That it's both seen and a part of the scenery.

Circumstances arranged themselves so that you made the thing, all the pictures you've looked at and all the pictures you've made that have been influenced by those pictures, and your teachers, the weather, what you had for lunch, all your combined experiences went into the making of this picture. Then you send it into the world because you want to share it. Because part of the reason you made it, was in order to share it. So part of sharing it, is being willing to let it go. That's the compromise. What people eventually do with it, what they think about it, who they choose to share it with, all of this is out of your control. Unless you destroy it, there's nothing you can do about its eventual fate. And maybe this isn't a compromise. Maybe it's part of the reason you made it, if reason has anything to do with it. But the picture will have a life of its own, and maybe someone will do something with it that you would have never guessed they might do, something amazing that you had never thought of. This often happens in collaborations, but some collaborations are unintentional, or at least, don't directly involve the decisions of their collaborators. And sometime that might really piss you off, and maybe sometimes it won't. It makes me wonder how some musicians feel about these remixes and mash-ups that people do of their work. I imagine that some people tend to appreciate it and think of it as a homage. I imagine other people feel a little affronted.

When I see all the terrible interpretations of Alice's Adventures in Wonderland (Tim Burton got the look, but the script was pretty horrible), or all of these atrocious Dr. Seuss movies, it pains me just a little. How could someone so misjudge the source material? There's an Elaine May movie I like called The Heartbreak Kid that was recently remade, in which a guy falls in love with someone else on his honeymoon, someone who is basically a blank slate for him to project all his desires on. You never really learn much about her. All you do is see her walking around and being pretty. His wife in the movie, conversely,is all too human. She's earnest and innocent in her conviction that her new husband will accept her and love her for who she is. She's a deeply sympathetic character played wonderfully by Elaine May's daughter, Jeannie Berlin. In the remake, the guy's wife is a completely unsympathetic caricature. She's a collection of bad and off-putting habits. The Farelly Brothers entirely missed the point. And maybe someone will remake the movie again and turn it into something else, maybe not something better or worse, but something else, and Elaine May and Neil Simon will continue to have nothing to say about it, Salvador Dali will put a mustache on The Mona Lisa and Leonardo DaVinci will have nothing to say about, someone will mix The Beatles' White Album with Jay Z's Black album and none of these artists will be able to stop the inevitable.

The painter, Clyfford Still, insisted that his paintings never be rotated from the walls in the museums where they are shown, that they need to always be a permanent fixture. I hate Clyfford Still's work, and always resent this. The Clyfford Still room in the San Francisco MOMA could be filled with paintings that I actually like, instead, but Clyfford Still was such a dick that we're stuck with his annoying paintings. And what's particularly annoying, is that in the end, it's all for nothing. Entropy doesn't care about Clyfford Still. So maybe the best way for me to let go of the frustration I have when someone does something I wish they wouldn't to one of my pictures is to think of Clyfford Still. You can try to control what people do with your pictures, but you might risk becoming a dick like Clyfford Still, or at least, someone's Clyfford Still. Do I really want to be that kind of a pain in the ass?
Posted by Jed Alexander at 4:19 AM