An optional assignment for The Society of Children's Book Writers and Illustrators fifth annual Illustrator's Day at Fort Mason in San Francisco ( I know that's a mouthful. SCBWI Illustrator's Day for short) was to do two pages and a spread for the book, "The Gingerbread Boy." Joann Hill from Disney/Hyperion would art direct the pieces by e-mail, and we would show the finished pieces at the event. It was a fun project and it was great to work with Joann, who, like any good art director, made some great suggestions to improve my images. I've posted the initial sketches I submitted to Joann, and the finished pieces so that you can see the differences.

Thinking of desserts, I thought of the painter Wayne Thiebaud, 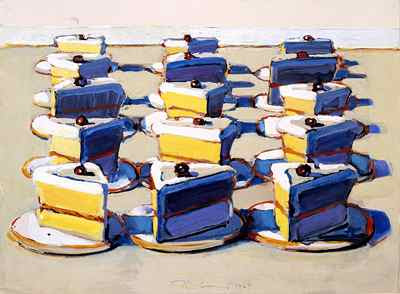 Though Thiebaud was an inspiration. I didn't want to emulate Thiebaud, but used him as more of springboard than anything else. Joann, like me, was a fan of Thiebaud and really liked the idea.

The first piece illustrate's the text, 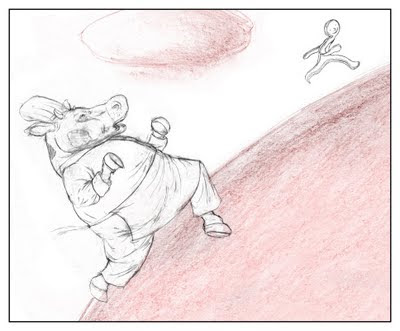 This series of images is designed to be wordless. Here I"m expanding on the idea of "as fast as his legs could carry him", a phrase used earlier in the text. Rather than a strict literal interpretation of the idea, I chose to have the gingerbread boy take one of his legs and turn it into a car so he could get to where he needed to go a lot faster than, strictly speaking, on foot. 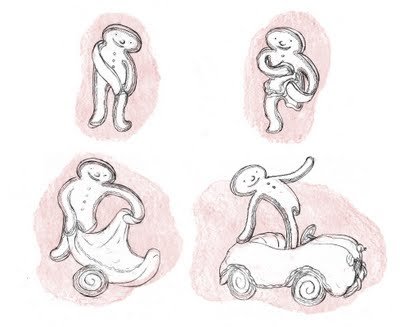 This one illustrates the text,

"And the cow ran after the gingerbread boy..."

and on the facing page of the spread:

So here's the roadside diner on a Thiebaudesque landscape.

Joann gave me some really positive feedback on my sketches, but suggested a few key changes. She thought the cow looked a little bit surly, and that he wasn't quite looking at the Gingerbread Boy. She wanted the cow to have more of an expression of "delight." So I changed the cow's expression, and getting the cows eye line to match up with the Gingerbread Boy was simply a matter of giving him a little tilt. 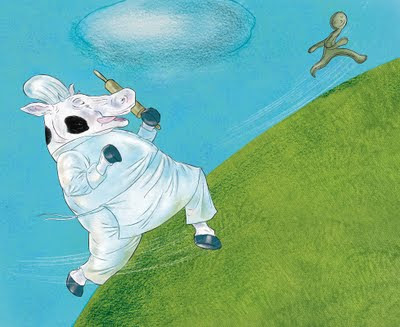 I used a number of textures here: the hill is a pattern made with a fan brush, oil paint and mineral spirits. Much of the color is pastel, and the cloud and outline for the hill is simply done in pencil on print making paper, which I popped over the textures.All the line is in ink, and the color is placed in later digitally.

For the second illustration, Joann liked the idea of the car, but didn't care for the fact that the gingerbread boy was amputating his own leg, which is easy enough to understand. I suggested that he take the dough from his leg without it diminishing him, similar to something you might see in claymation. She liked this idea, but wanted me to vary the Gingerbread Boy's expression more as he's struggling to make the car. I added eyebrows to give his simple dot eyes a little more range of emotion, and I think the expressions added a great deal to the narrative. And here's the spread. 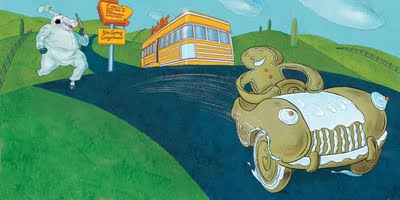 Joann also had me change the expression of the gingerbread Boy in the spread, again adding to his character and emotional range. At first she was ambivalent about the diner. Diner's reminded her of hamburgers, and she was questioning the logic of the cow working at a diner. Eventually she decided that she had over thought this, and that she liked the diner as an image. She suggested that the cow carry a rolling pin, which contributed more to the idea that he was a baker, rather than a grill cook. It was great to see that Joann didn't stick with her first impression and was able to change her mind. This emphasizes to me the collaborative nature of illustration, that there's always a little give and take. A good art director can be flexible, and flexibility on both ends is what ultimately makes a better finished piece. It was great to collaborate with Joann, and I hope that I'll be able to someday work with her as a professional!

I'd also like to give a special thanks to Lea Lyon, who organized the event, and is a talented illustrator in her own right. This is the fifth year that Lea has put this together, and there were some excellent guests. Guests included the amazing illustrator Andrew Glass, Literary agent Linda Pratt from Wernick and Pratt Agency, and of course Joann Hill. There were also some other professionals available for critiques, including John Clapp, my former teacher at San Jose State, and Abigail Samoun from Red Fox LIterary. I'm a fan of both Abigail and John, so it was great to see them both at the conference. Please feel free to click on any of the links above to learn more about the guests at the conference.
Posted by Jed Alexander at 11:35 AM