Why David Letterman Once Mattered: Satire on TV


Small town news on David Letterman, circa 1980 (at 3:26) the original internet content, irony provided by Dave.

For better or worse, Letterman represented a sea change in mainstream media.

The Johnny Carson and Mike Douglas model offered straight Bob Hope and Borscht Belt inspired gags, and Letterman was the first to add a post-modern edge to the format. Political content was minimal and lacked the teeth of shows like Colbert and The Daily Show today, but Letterman was the original source of the tone of those shows, a wink to the audience that what they were watching was artifice. Unlike Saturday Night Live, (which by the early 80s was going through one of its worst periods) Letterman mocked the format itself and the fundamental fakeness of TV talk shows in the context of a TV talk show, something no one had done before.

One convention of the format that Letterman hated was product endorsements, a mainstay of talkshows since their inception, segments in which the host would introduce whatever product the sponsor was selling. Even Mike Wallace shilled cigarettes.


But Letterman's ambivalence was apparent. I remember at one point seeing him walk out in the middle of one of these endorsements, refusing to continue. Eventually the network allowed him to stop altogether.

I remember as a kid being introduced to cartoonists like Harvey Pekar (who Letterman didn't really get) and Lynda Barry (who else would book a small press comics writer and cartoonist on a late night talk show?) Here he is interviewing Barry:

and the underrated Chris Elliot, a writer on the show who also helped to set the tone.

Letterman featured singularly unique guests and comedians who seldom appeared anywhere else, like Andy Kaufman and Brother Theodore. Brother Theodore would show up on the occasional Tonight Show episode, but he was a frequent guest on Letterman. The mainstream audience didn't have the patience for anything that wasn't Seinfeld style, gag a minute comedy, but Brother Theodore found a home on Letterman.

For me, as a Kid, Letterman was my Mad Magazine. Mad Magazine was the original inspiration for Saturday Night Live and Letterman's brand of humor, but by the 80s had gotten into a kind of rut and had lost a lot of its former bite. Letterman had something new to say, or at least, a new way of saying it.

Not that Letterman wasn't subject to the constraints and compromises involved in working for a show and  network whose main job was to sell soap and mouthwash and shill movies and TV shows with celebrity appearances. While subversive in its way, Late Night With David Letterman was still fundamentally a part of the corporate machine. When GE bought NBC, Harvey Pekar, in a now notorious appearance, took Letterman to task on this point, in affect, pulling down the curtain and revealing what Letterman's job truly was:

Letterman's anger here is personal. Letterman knows what his job requires him to do, and like his ambivalence about endorsing soap and mouth wash, he has some awareness that he's a passive actor in a larger high stakes game. He's owned by a corporation whose job is to sell junk.

Pekar revealed the failure and threshold of Letterman's ability to subvert, and I think he knew that what Pekar accused him of was fundamentally true. Lacking the charisma of Letterman (and with Letterman's own dismissal of Pekar as a guy who "writes comic books") nobody was listening. Pekar was considered a crank who had outstayed his welcome. He was no longer an amusing eccentric to serve as the butt of Letterman's jokes but an annoying nuisance.

Unfortunately many of these more oddball guests were treated as objects of ridicule by Letterman. They were lovable eccentrics, but "lovable" only went so far. Once again, Letterman gave a wink to the audience to say, "look at the freak show,"tolerating, but never fully embracing his guests who went just a little too far outside of the mainstream.

Now that every talk show on the air has adopted Letterman's ironic pose, this post-modern self-referential wink has lost any real irony or subversiveness it once had. Its been reduced to a trope, and The Late Show with David Letterman has blended into the background. 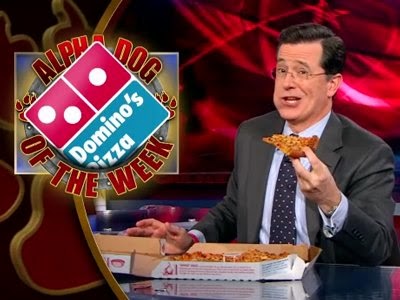 While Comedy Central's The Daily Show continues to be great satire, the most progressive talk show on the air is The Stephen Colbert Show which owes no less a debt to Letterman. Colbert has taken Letterman's knowing wink a step further. He presents a character whose every word is a lie. The subtext is the constant acknowledgement that all media is a lie. Using this character as vehicle, he's able to criticize the media in such a biting way that he would otherwise appear shrill and difficult to digest to a mainstream audience. But Colbert pulls it off smoothly and flawlessly, and his message is seldom lost on them.

As long as he's not selling something.

While on a certain level, Colbert's commercial endorsements, because of the inherent insincerity of his character, subvert their purpose, they're all too effective. Despite his pose, the audience's love for Colbert negates whatever intended irony or inherent insincerity lies in the pitch. In that moment he becomes the character he parodies, and is no less a celebrity pitchman.

This is the essential compromise that is commercial television.You can't bite the hand the feeds you. It's why, for the majority of its run, Mad Magazine, the grandfather of all media parody in this country, refused to accept advertisements. It was only after Bill Gaines sold the magazine to Warner Brothers and Gaines was long dead that ads began to run. Mad Magazine became a part of the corporate machine just like Letterman and Colbert. In the end, you can't be owned by GE or Warner Brothers, and you can't run endorsements for other products without compromising the very purpose of satire.

While the compromise is less glaring in Colbert, it's still there, and unfortunately, this is the only kind of satire that the mainstream public has an appetite for. You can only poke the corporate beast so hard. There's only so far that we'll allow our own contradictions to be revealed to us, especially when we're being entertained.

Posted by Jed Alexander at 9:33 AM