Once There Was a Man Whose Nose and Mustache...

Edit: Here's a new version with the lettering more integrated.

This will also likely be the only limerick I ever write. I'm not a great fan of limericks and don't tend to write rhyming verse in general, so this isn't something I intend to pursue. This is it folks. 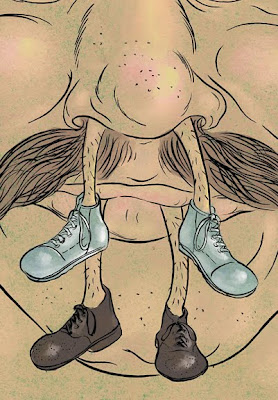 Back by popular demand: hand lettering. I haven't hand lettered in a while, and there is something satisfying to me about hand lettering vs. typography, though sometimes one seems more appropriate to me than the other. For this one though, no matter what type style I tried, it never quite seemed to gel, so I ended up hand lettering it. I don't tend to get too fancy with my hand lettering--I'd like to try different types of title lettering at some point, but right now this is my default hand lettering style.

Another thing I tried here was something that I frequently used to do in painting, but that doesn't always translate well to print; a neutralizing green beneath a skin tone. There are a number of ways to do this--believe it or not, green is a color commonly used in skin tones to neutralize its compliment, red, so the skin tone won't have the artificial glow to it that it generally has if you go straight pink or red-brown. One technique I used was to apply a base tone of green and then glaze (apply a thin layer) of the pinkish color over top of it, but this tended to be more effective when seeing the actual painting in person, rather than in print.

Lately I've been using pastel textures, which made me think of the illustrator Gary Kelly. Kelly puts down his base tone of green, then similarly lays in a pink color after he's fixed the green layer with spray fixative, and the green would peek through here and there in grainy patches, causing you to visually mix the colors, sort of like what some of the impressionists used to do. In pastel, this effect reproduced extremely well. When it's done well, most people don't even catch it, unless they know to look for it, and it enriches the shadows. I've always liked the rich effect of a color peeking through from underneath its compliment, and so using the two-tone pastel texture I made for the last piece, this was easy to do.

Oh, and just an added note about the repeated imagery: not quite reused art here. I printed out the pencil drawing in blue line and inked it twice. I don't like reused artwork, but I hate redrawing things, so this seemed like a good compromise. Again, most people don't notice, but other artists definitely do. Reused art is the cardinal sin for cartoonists, and I suppose I'm just as much of a snob about it. It's just that extra element of craft when the images are all hand drawn, or at least, in this case, hand inked.
Posted by Jed Alexander at 6:09 AM